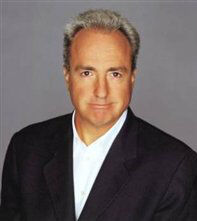 Lorne Michaels (born November 17, 1944) is best known for creating and producing Saturday Night Live and producing the various film and TV projects that spun off from it.

Michaels was born Lorne Michael Lipowitz in Toronto. He began his career as a writer and broadcaster for CBC Radio. He moved to Los Angeles from Toronto in 1968 to work as a writer for Laugh-In and The Beautiful Phyllis Diller Show. During the late 1960s and early 1970s Michaels wrote for a number of Canadian TV series and specials, most notably starring for three seasons in The Hart and Lorne Terrific Hour. He was a cast member of the Canadian program That's Show Biz in 1970. In 1973 he married his junior high school sweetheart, Rosie Shuster, who would work with him on Saturday Night Live as a writer. She was the daughter of Frank Shuster, one half of the famous comedy team, Wayne and Shuster. Michaels and Rosie were divorced in 1980.

In 1975, Michaels created the TV show Saturday Night Live. The show, which is performed live in front of a studio audience, immediately established a reputation for being cutting edge and unpredictable. It became a vehicle for launching the careers of some of the best-known comedians in North America, including: Chevy Chase, John Belushi, Dan Aykroyd, Gilda Radner, Bill Murray, Eddie Murphy, Mike Myers, Dana Carvey, Chris Rock, David Spade, Chris Farley, Adam Sandler, and Will Ferrell. Originally the producer of the show, Michaels was also a writer and later became executive producer. He occasionally appears on-screen, as well. SNL has been nominated for more than 80 Emmy Awards and has won 18. It has consistently been one of the highest-rated late-night television programs.

Michaels has been with SNL for all seasons except for his hiatus in the early 1980s (seasons 6-10).

Michaels started Broadway Video in 1979, producing such shows as The Kids in the Hall.

After temporarily leaving SNL in 1980, Michaels created another sketch show entitled The New Show. It received good reviews but was a failure in the ratings and it was cancelled after 2 months.

In the 1980s, Lorne Michaels appeared in an HBO mockumentary titled The Canadian Conspiracy about the supposed subversion of the United States by Canadian-born media personalities, with Lorne Greene as the leader of the conspiracy. Michaels was identified as the anointed successor to Green.

As producer, except as noted

In 1999, Michaels was inducted into the Television Academy Hall of Fame. In 2002, Michaels was made a member of the Order of Canada for lifetime achievement, and awarded a star on the Hollywood Walk of Fame.

In 2004, he was awarded the Mark Twain Prize for American Humor by the John F. Kennedy Center for the Performing Arts, the first non-American to earn this honor. Speaking at the awards ceremony, original Saturday Night Live cast member Dan Aykroyd described Michaels as "the primary satirical voice of the country."

Retrieved from "https://upallnight.fandom.com/wiki/Lorne_Michaels?oldid=3911"
Community content is available under CC-BY-SA unless otherwise noted.