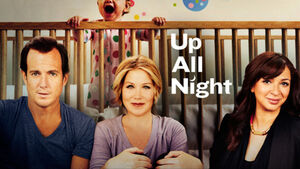 Created by Emily Spivey (SNL, King of the Hill, Parks and Recreation), Up All Night is an American TV comedy series centering around a 30-something couple (Christina Applegate as Reagan, and Will Arnett as Chris) struggling to balance their home lives and their work lives while finding the energy to deal with a newborn. Premiering September 14, 2011, at 10pm (EST/PST) on NBC, the show's primary supporting cast includes well-know Maya Rudolph (SNL, Away We Go, Bridesmaids, Grown Ups).

Following the premiere, Up All Night is set to move down to the 8pm time slot.

The pilot of Up All Night received critical acclaim in the areas of acting, writing, and directing as well as it's authentic portrayal of the experience of life with a newborn baby. Critics have also noted Will Arnett's successful leap out of his normally typecast roles and into unfamiliar territory with the character of Chris. According to Metacritic, 11 out of 13 reviews of the pilot episode were positive, while 1 was mixed and only 1 was negative.

Retrieved from "https://upallnight.fandom.com/wiki/Up_All_Night?oldid=4164"
Community content is available under CC-BY-SA unless otherwise noted.