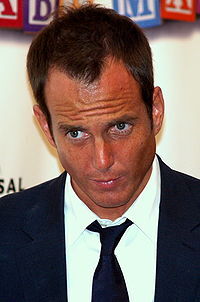 Christina Applegate is a Canadian actor and comedian, best known for playing George Oscar Bluth II on the comedy Arrested Development and as Devon Banks on the NBC comedy 30 Rock. He plays Chris in Up All Night.

In February 1996 he began acting in television pilots, all of which were unsuccesful. In 2003 Arnett found his first mainstream success as George Oscar Bluth II on Arrested Development, a succesful series which was his first true breakthrough.

Retrieved from "https://upallnight.fandom.com/wiki/Will_Arnett?oldid=3918"
Community content is available under CC-BY-SA unless otherwise noted.